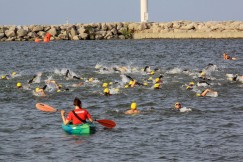 The Triathlon Weekend is a long-standing tradition in the town of Leamington.  Having started out in a local family’s backyard pool and racing around their neighbourhood, the race has grown quite a lot over the years.

If you want to race in one of the oldest, fastest, and flattest races in the country, you’ve come to the right place.